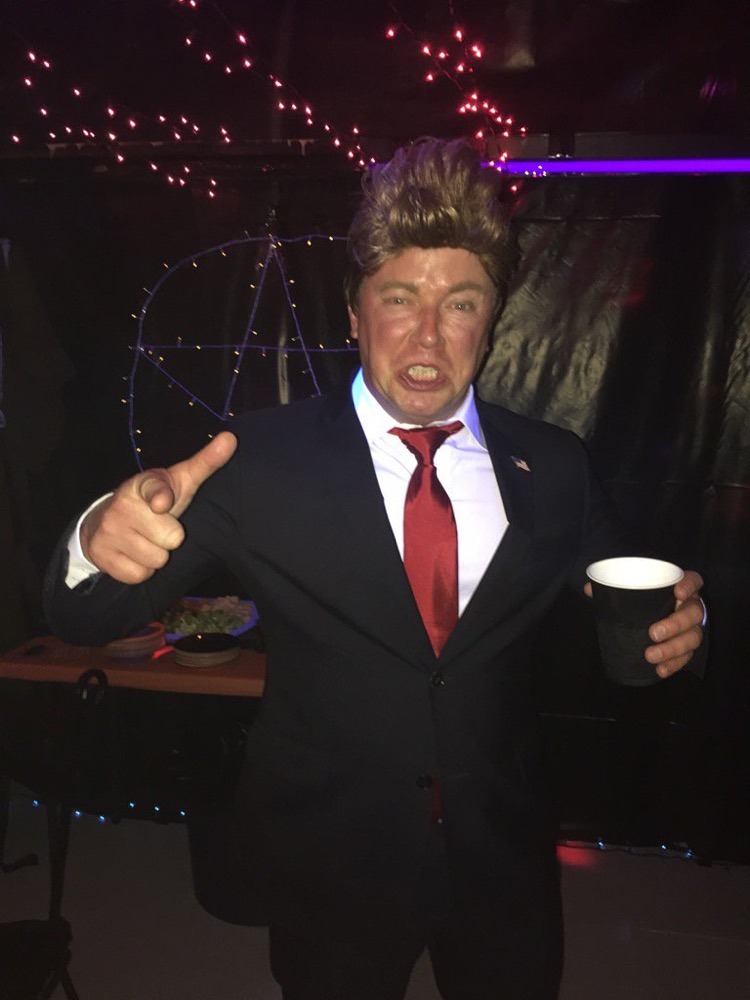 We have impersonated each other.

There – I said it.  The truth is out like a scarlet letter.

While my impersonation was for Halloween (pictured), it’s fair to note that his impersonation of a PR professional was also for a costume contest – so the actual Trump could be considered a stud for outlets like People.

While much of Trump’s mastery of media has been described in negative terms, there are a few key Trump Tactics we can learn from him when dealing with the media, including:

Todd Gitlin of the Washington Post observed: “Trump regularly runs circles around interviewers because they pare their follow-up questions down to a minimum, or none at all. After 30-plus years in the media spotlight, he knows how to wait out an interviewer, offering noncommittal soundbites and incoherent rejoinders until he hears the phrase, ‘Let’s move on.’”

What Trump has done is to make one of television’s biggest constraints work for him. TV journalists are constrained by time allotments that make it difficult to spend a lot of time on one subject. Furthermore, they can be seen as badgering the witness and could find themselves unable to book interesting guests whose political views would run counter to their own. CEOs and other people subject to TV interviews should keep this in mind when facing unpleasant questions. In fact, if the interview is live, an interview subject may want to consider talking very slowly to run out the clock.

During the Republican primary debate in late October 2015, CNBC host Becky Quick asked Trump: “You had talked a little bit about Marco Rubio. I think you called him ‘Mark Zuckerberg’s personal senator’ because he was in favor of the H-1B.”

Quick: “So this is an erroneous article the whole way around? … My apologies, I’m sorry.”

Quick moved on – until she discovered the source of the material and returned to her question: “Mr. Trump, I want to go back to an issue that we were talking about before, the H-1B visas. I found where I read that before. It was from the donaldjtrump.com website and it says — it says that again, Mark Zuckerberg’s personal senator, Marco Rubio has a bill to triple H-1Bs that would decimate women and minorities. Are you in favor of H-1Bs or are you opposed to them?”

For any other person there may have been a temptation to admit wrong-doing. Trump’s website had the very content he not only disavowed but used as a tactic to throw off the moderator. Any admission of wrong-doing could take him down a slippery slope of trustworthiness or not knowing his own election message. He was being called out.

What would he do?

Trump stuck to the gist of his message – and did not apologize for anything.

“I’m in favor of people coming into this country legally,” he said. “And you know what? They can have it any way you want. You can call it visas, you can call it work permits, you can call it anything you want. I’ve created tens of thousands of jobs, and in all due respect — and actually some of these folks I really like a lot — but I’m the only one that can say that.” And on and on he went.

Kevin Drum of Mother Jones wrote about why Trump and others are so emboldened to lie: “Candidates have apparently figured out that they don’t need to tap dance. They can just baldly lie. Trump did it. Rubio did it. Carson did it. Fiorina did it. They know that time is short and they probably won’t get called on it. The worst that will happen is that fact checkers will correct them in the morning, but only a tiny fraction of the viewing audience will ever see it. So what’s the downside of lying?”

From a PR perspective, there are a variety of reasons why you shouldn’t lie. But just as anyone who has ever been asked, “Does this outfit make me look fat?” there are also reasons why you may not want to tell the whole truth. The Trump Tactic displayed here is not to open yourself up to questions about untrustworthiness but rather to reframe the question and answer in a way that sticks to your story.

Trump Tactic #3: Do your own PR

Donald Trump seems to share the opinion of many CEOs – PR is so easy you can do it yourself. Reporters who talked to Trump’s alter PR egos “John Miller” or “John Barron” told the Washington Post that Trump’s PR person was unusually helpful, providing details that few sources could.

By many measurements, he has been successful. The New York Times in March estimated Trump has earned nearly $2 billion in earned media placements, more than double that of Hillary Clinton.

But what Trump fails to realize is that being too close to the story means coming too close to be objective. To address the tide of DIY PR, VentureBeat published “Here we go again: 5 reasons hiring a good PR firm is smart business” from the CEO of a PR firm to show the ROI behind hiring a PR agency:

For Trump, nearly all the reasons are important – except the last, since “John Miller” and “John Barron” didn’t technically add to the payroll – just to the imagination.

However, there is one additional element that PR adds to a company or a leader – cachet.  Sue Carswell, a reporter at People who took center stage in the Washington Post’s article about Donald Trump and his PR personas, described why she found Trump’s charade so “farcical.”

“Here was this so-called billion-dollar real estate mogul, and he can’t hire his own publicist,” she told the Washington Post.  “It also said something about the control he wanted to keep of the news cycle flowing with this story, and I can’t believe he thought he’d get away with it.”

That makes November 8, 2016 – Election Day – more important than ever before. Will Trump get away with it? If so, that’s one Halloween costume I can easily recycle.