What CMOs Should Know About Speaking at Conferences 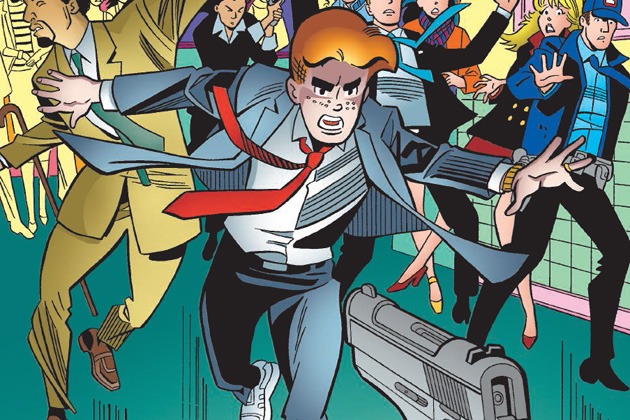 It’s been over two years since Riverdale’s Archie was killed off while saving his gay best friend.

The timing of the story was odd – July 14, 2014.  Nothing was happening. Germany beat Argentina in the World Cup final. The House judiciary chair said “no” to impeaching President Obama. The only relevant activity at which it would make sense to announce something like this was Comic-Con. But that wouldn’t take place until 10 days later, on July 24.

Which is why breaking the news of a beloved comic book character’s death on a ho-hum news day before a big industry event was so brilliant.

By announcing the week before Comic-Con, Archie Comics ensured that they wouldn’t be overshadowed by DC, Marvel or the movie studios. At Comic-Con several media outlets made the death of Archie a feature story. The decision by Archie Comics to announce early also seemed to force other publishers to act.  In fact, two days later, Marvel announced that Captain America was black, Thor was female and Iron Man had a new suit.

So when it comes to winning conferences, making news early helps you stand out from the crowd – and can even drive the agenda.

However, for some marketers without a storied brand, the challenge is more fundamental. How do you even get a speaking submission green-lit – without pay-to-play?

Jocelyn DeGance Graham, founder of CloudNOW, suggests networking early. “As best you can, figure out the key content decision-makers and network with them directly versus sending a submission in cold. You’ll want to also target events that offer merit-based speaking opportunities and avoid ‘pay-for-play’ spots. To generate excitement before your talk, consider releasing a ‘teaser’ blog about the key issues you’ll be addressing and why they are important. Ask the conference in advance if they will be recording, and get a copy of your talk that you can share post-event. And be sure to have trusted colleagues take pictures of you and tweet during your talk.”

Once your submission is approved, you need to make sure what you’re saying is relevant. Nothing will hurt the credibility of your presentation like people leaving before you finish.

“Start with your audience,” recommends Alexandra Roddy, global head of marketing for Prologis. “Try to learn everything you can about who they are and what brought them into the room. What are their expectations? Aspirations? Then, fine-tune your speaking strategy to ensure that you do everything in your power to meet your audience’s expectations and then some, while balancing an equally important imperative – being your authentic self. The bigger the crowd, the more important it is that with all eyes on you, you do you!”

Evelyn De Souza, data governance leader for Cisco Systems, stresses that the opening must be strong. “Be prepared with a dramatic opening, in the same way you might frame the entrance to your home with something bold and striking.  Avoid hype but be prepared to shed new light on a new reality that the audience will not have heard. Too often a bland opening sets the tone for the rest of the presentation you might be giving.”

CMO Shail Khiyara added, “Stories are data with emotion, so consider combining the two. You want to come across as erudite and knowledgeable, but without arrogance, and succinct, with no ornate metaphors.”

Executive coach Diane Parrish says it’s important to consider the actual venue and style of seating. “For example, if in a ballroom venue with tables in the round, you could walk around the tables, addressing people individually versus standing on a stage or at a podium.  If it’s a smaller audience, get names, bios and photos in advance. Do research on the individuals and address their concerns or topics of interest, if relevant, in your talk. And don’t use a microphone, for example; keep things intimate. Another idea to consider: sit at the same table and address audience members at ‘their’ level, instead of standing.  If it’s a large audience and venue, make sure the message you articulate is presented in a memorable way by asking questions, using current events, addressing a key pain point, telling a human story through video, or inviting a guest speaker to help tell your story on stage with you.”

Once you have your spot secured, the question becomes how to perform without any screw-ups. Ian McShane, director of global product marketing at Symantec, recommends, “Practice early and practice often. Showing up unprepared for a speaking opportunity of any size will, at best, leave you nervous and sloppy and at worst leave you looking incompetent and likely with fewer opportunities in the future. Give the audience the respect they deserve and practice!”

Serenity Thompson, director of the marketing practice of A23 Advisors, recommends at least one week for rehearsal with a video camera to eliminate ums and fix body language concerns. She added, “Presenting live on stage is not the time to try something new and will likely result in you going off on a tangent. Those ‘organic moments’ you think you have seen in other presentations were scripted, believe me. Trust your talking points. If you really feel the need to speak extemporaneously, keep it for the Q&A session.”

When you’re finished, hold off on that celebratory beer or cocktail. Instead, make sure your session was recorded and that the highlights are shared on social media. Whether your talk was about the heroic death of a beloved comic book character or the merits of a new technological platform, it’s worth it to make sure your moment in the sun will shine outside the convention halls.