Attracting Influencers Is About Giving Them What They Want

For some reason, sports movies really get the gist of PR.

This year’s “Battle of the Sexes” is ostensibly about Bobby Riggs and Billie Jean King but is actually about two PR approaches: stunts versus campaigns. 1996’s Jerry Maguire is about getting your clients to prevent self-sabotage: “Help me, help you.” But when it comes to attracting influencers, the sports movie that gets it right is 1989’s “Field of Dreams,” starring Kevin Costner and featuring the mantra, “If you build it, they will come.”

This is important because, as more people turn to Twitter or Facebook for advice, social media influencers are becoming the king-makers of our time. In fact, 94 percent of brands who have used influencers found them to be effective, and influencer campaigns generate 11 times higher ROI than traditional marketing.

The problem is finding one.

The typical approach is to seek out popular YouTubers and Instagrammers who have the attention of your target market. If you sell cosmetics, for instance, find beauty bloggers and vloggers. But tracking down and contacting influencers one by one is soul-sucking and time consuming.

You can also expect mixed results from cold pitching your product. Influencers aren’t salespeople. Generally, they don’t want to just endorse a product in exchange for money—even a lot of money. They’ve worked hard to build a personal brand that their followers trust, and they want to share things with their followers that they’re genuinely excited about.

Influencers want to participate in something creative, innovative and cool. They want to collaborate. If you put together something participatory that’s meaningful to an influencer in your niche, they may just start sharing your product organically, with minimal networking on your end.

So, leverage your time more efficiently, and let influencers come to you. In other words, build it and they will come.

To attract influencers, you’ve got to create something inspirational. People are inspired when they’re part of something bigger than just themselves. When people are inspired, they’ll support your product and concepts authentically. Make sure that at the heart of your project is an important idea that people can easily connect with. Then structure the project in a way that makes it easy for them to participate.

People also like to see themselves in a project. When you’re putting your idea together, make sure it contributes meaning and value to your target market’s personal brands. What does all this look like in real space? Let’s check out an example of a real-life campaign to attract influencers.

Consider Capsure, a social media startup geared toward private sharing that’s safe for families and allows for tailored posting. Instead of seeking them out, Capsure is drawing influencers to them. They created a digital publication for influencers to share their thought leadership, called Capsure Life.

It’s a platform that’s able to engage influencers without a big budget, because it provides them with a reason to share content that benefits them. By contributing to the publication, they establish thought leadership. The influencer engagement campaign was set up by Kindred PR, which understands that in order to attract influencers, you have to provide value.

By curating influencer content, Capsure Life generates a constant stream of shareable, on-brand content for Capsure’s social media profiles. Meanwhile, it amplifies the voices of influencers who can share their content with their audiences, funneling them through Capsure Life’s world.

It also positions hashtags to go viral. Capsure built in a #CapsureIt section where photography influencers like Ryan Parrilla can share their snaps, complete with a Humans-of-New-York-style description of why their visual moments matter. This model spotlights contributing influencers, creates content for Capsure, and draws the influencers’ audiences to visit Capsure Life and get involved. Everybody wins.

Getting started on your influencer campaign

How can your company leverage influencers’ reach by offering them the spotlight?

Get creative. A little brainstorming will go a long way. What your influencer campaign will look like will depend a lot on your product, industry and target market. Start with some hashtags and memes, but don’t stop there. How can your company add value to an influencer’s personal brand? How can you inspire people to get involved? Why did you start your business to begin with?

If you follow these questions far enough, you’ll arrive at exactly what it is about your company and product that are worth shouting about. By harnessing that excitement, you can capitalize on the amazing potential of influencer marketing that’s transforming the marketing world as we know it. All you have to do is build it first.

You know when you come across something that is completely unrelated to your job...but you think about it for a moment and realize that it actually isn’t? And then one… 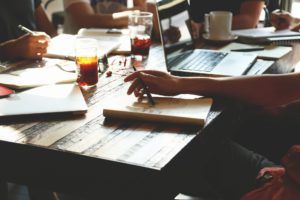 PR in times of turmoil

How to be an informed practitioner when the world around us is in chaos At its best, PR can elevate important issues and disseminate powerful messages. At its worst, PR…

Fighting wars isn’t hard … fighting for a job is!

Veterans are one of the most underutilized groups in society, and I believe that this comes from the belief that we all have PTSD or are “broken.” Being a veteran…